REVIEW: Signal to Noise by Neil Gaiman and Dave McKean 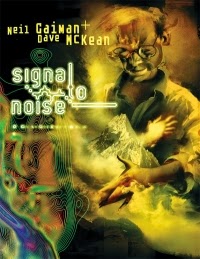 “The world is always ending for someone.”

At first glance Signal to Noise is not a horror story. For one thing, it contains none of the genre’s familiar trappings. For another, it reads more like a man’s last confession than a terrifying plunge into the realm of the weird. Despite these differences, the graphic novel offers one of the darker, more unsettling narratives I've come across.

At the onset of the story we are introduced to the narrator, an accomplished film director recently diagnosed with a terminal illness. He tells us he has been given only months to live and must begin to put his things in order. He instead chooses to disconnect from the outside world, limiting his interactions with other people as much as possible. As the days turn to months, and his mortality looms ever closer, he resolves to devote himself to the only thing he has left: creating his magnum opus - a film titled Apocatastasis. Only, with no time to actually produce the film, he begins to shoot the movie in his head. 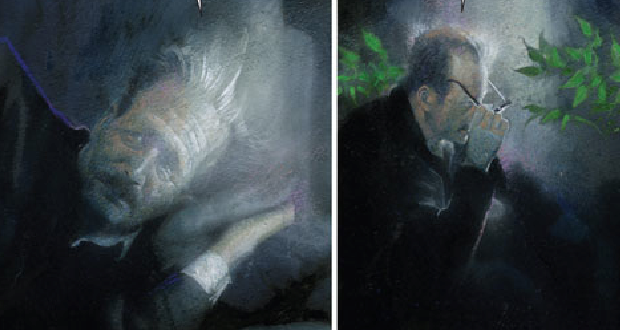 “I can hear the silence. And it won’t go away.”

From this moment we are treated with a meditation on living and dying, escapism and what value our creative endeavors have after we’re gone. In short, the narrator is no longer just facing his own death, he is also facing the death of an idea, perhaps the idea, and by extension his legacy as a creator and a human being.

The book opens on a scene inside the narrator’s head. He describes a group of villagers in the year 999 A.D. that come to the realization their world is about to end with the coming of the millennium. The colors McKean uses in these recurring daydream sequences are muted, relying heavily on black and dark blue in contrast to the yellows and grays of the real world.

Interestingly, as you continue to read, the colors from the dream world begin to bleed into the real world, showing a subtle shift in the emotional proximity of the man to his hopeless actors. This “bleeding” of color eventually culminates in the man imagining himself as one of the people in the film. He soon retreats to their snow-covered hills, joining them as they wait for death. 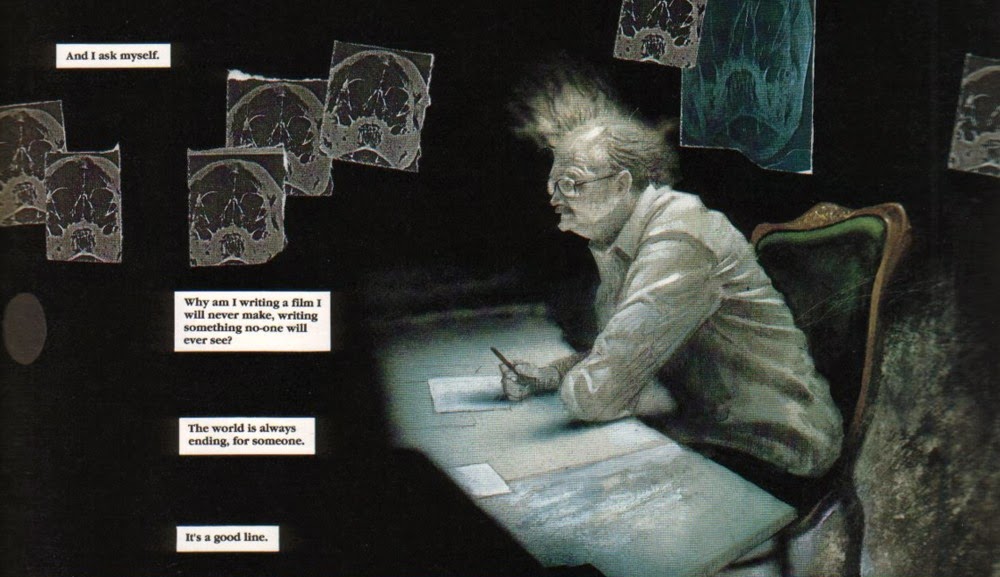 “They are going up to the high place, to wait there for the end of their world…I am going with them.”

The voice of the narrator is integral to the story, and Gaiman proves more than capable of giving us the necessary insights into the character. He shows us our world through a drastically different lens than we’re used to, and it is very easy to sympathize with the narrator as he waxes philosophical about his approaching death.

If you read this story casually, which is not advised, you are likely to miss the horror embedded in its narrative. While the plot is mostly overt, the grief the man experiences for his own death is subtle and relies on you being empathic enough to relate to it. If you take time to excavate the themes and the meaning behind the words you will find a gem buried in the bleakness, a light amidst the terror of dying while the world carries on without you.

Signal to Noise tells us that stories can live forever, so long as there are people left to hear them, and that a time will come when they must exist without us. 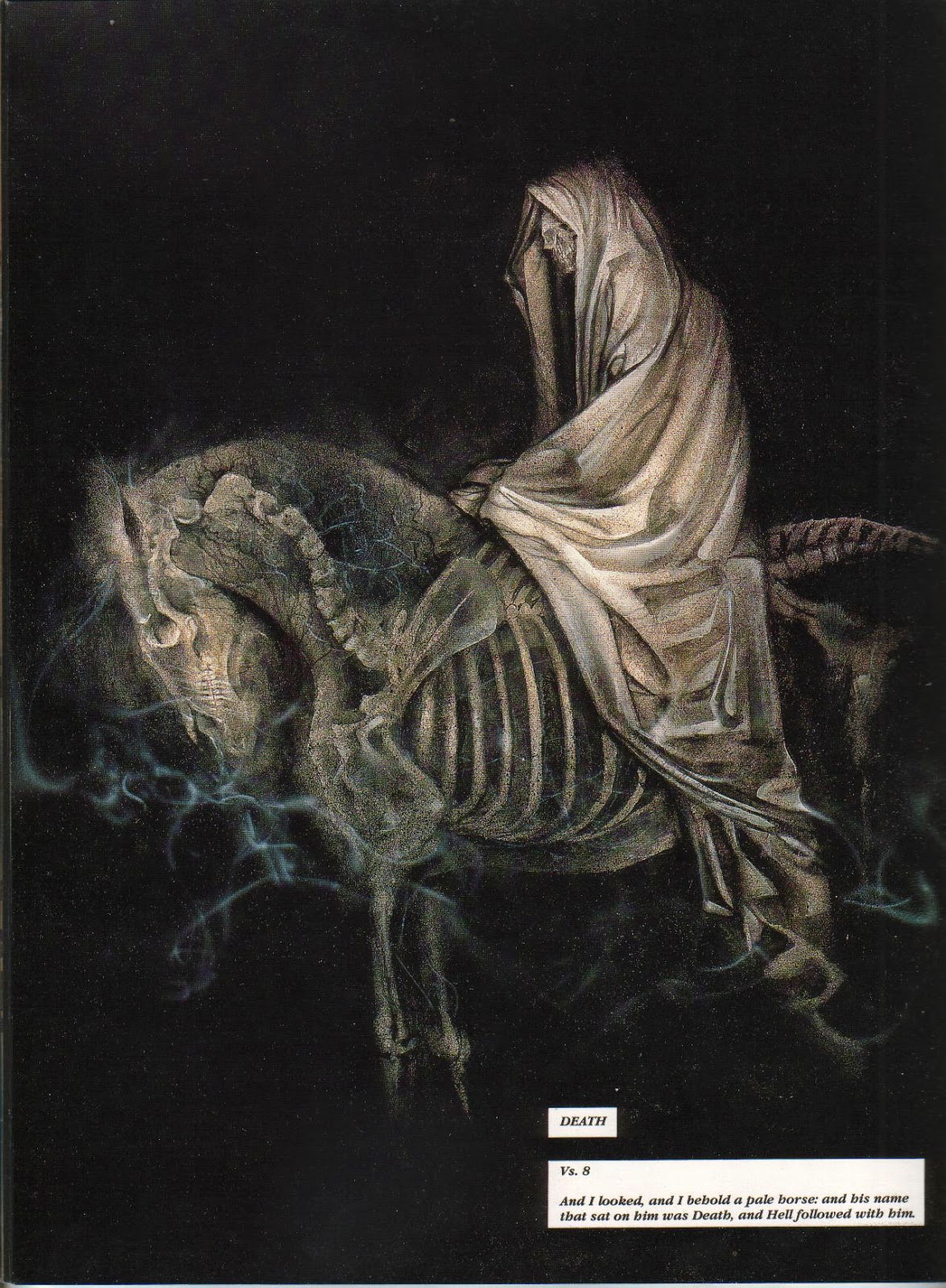 “And we die, because things that matter end.”

This is a subtle, introspective story that offers the reader an exceptional blend of light and dark. Fans of the Sandman series will feel right at home, and anyone who appreciates McKean’s unique art style will find plenty to gawk at. Highly recommended for those interested in a short, albeit haunting experience.
Posted by Clint at 6:58 PM No comments:

While a main goal of this blog is to highlight works that I find worthwhile, literature or otherwise, I am also interested in sharing my thoughts on the concept of horror itself: what it means to me and how I came to appreciate it. That being said, I've decided to begin by telling you about the moment that led me here. 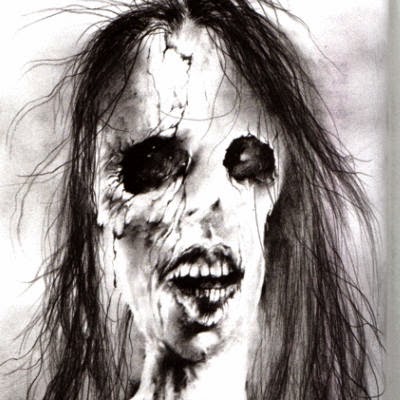 The beautiful woman you are looking at is from the children's story collection titled Scary Stories to Tell in the Dark. Many of you may recognize the book, most notably due to the brilliant illustrations by one Stephen Gammell. For those who don't know, the books feature retellings of supernatural folklore, collected and retold by Alvin Schwartz. Most of the stories themselves are more humorous than chilling, though there are certainly exceptions (one of which may receive its own post at a later date). But the artwork...

The artwork made the book.

I couldn't have been any older than six when I fell in love with horror, and it had everything to do with the woman above. My brother had checked the book out of our school's library and I remember us sitting on my bed when we came to this picture. The face alone was unsettling enough, but what really got me was finding a long strand of dark hair nestled between the pages. That was the only time I've ever thrown a book.

My best guess is the hair belonged to the last person to check the book out, but it still terrified me. It made the story seem real, more tangible somehow. For a long moment I refused to place my feet on the floor, knowing somewhere in my childish mind that the woman was there in my room waiting for me. Then something strange happened: I felt a tinge of curiosity and stepped from the bed. I crossed the room and retrieved the book from the floor, turning back to page 30, back to the image of the woman who was dead but not really. I studied the picture, the strand of dark hair now missing, absent as if it had never been there at all. I continued to look at the woman, trying to determine what it was about this image that terrified me. I didn't realize it then, but I wanted to find out how this artist had created something so visceral, so utterly affecting that it made an impact on me. Years later, upon discovering a certain Mr. Lovecraft, I realized that the feeling I'd had as a child could be replicated with words, and that was a powerful moment for me.

But perhaps that's a story for another time.

Email ThisBlogThis!Share to TwitterShare to FacebookShare to Pinterest
Labels: Children's Literature, Lovecraft, Scary Stories to Tell in the Dark

An introduction to what this is

I've always loved the idea that words, arranged in the right combination, can make you feel something. In the case of this blog, I am most interested in exploring works that incite feelings of horror and dread and the creeping sensation of things being not quite right.

The idea of starting a blog focused on horror has always interested me. I've long enjoyed reading reviews for horror fiction and games, especially when it leads me to discovering new titles, but most of all I've appreciated the unique insight and discussion fans of this genre have shared with one another online. There is certainly a community of passionate people who live and breathe this genre, and I find myself visiting their pages and forums time and again. So, I've decided to jump in and secure my own little place of horror that, hopefully, is read and enjoyed by like-minded individuals.

So welcome. I look forward to sharing my thoughts with you, as well as hearing what you have to say.