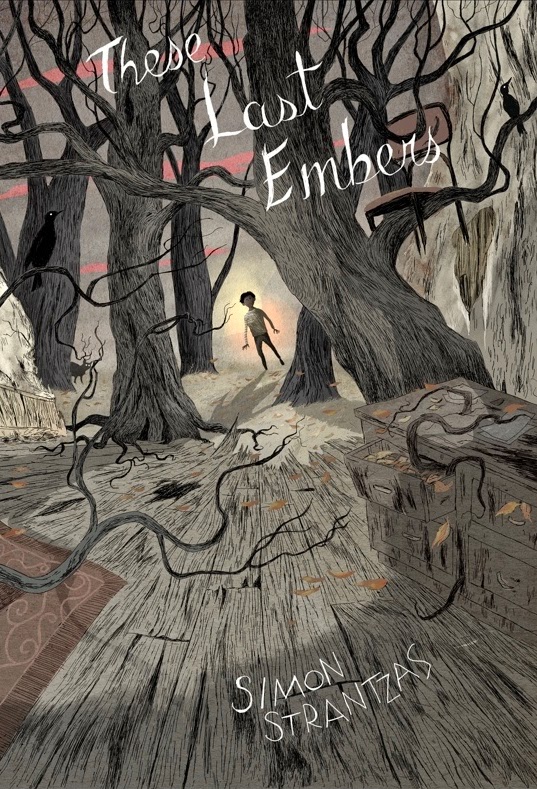 “…and his eyes were bored so deeply into his skull they were but pricks of light in the dark.”

A story, at the very least, should be an experience; a window into our world as seen by another individual. It’s a communication of feeling and insight, a record of what an author believes, or wants to believe, about how the world works. While some stories hold your hand and escort you to safety, ensuring you all the while the threat is not real, there are other stories that lead you into the dark with barely a whisper of what is to come, offering no comfort and no surety that things will end happily, or even end at all. These Last Embers is one such story.

The first in a new chapbook series from Michael Kelly’s Undertow Publications, These Last Embers tells us the story of a young woman named Samantha returning to her childhood home. Her homecoming, however, is not one of choice but necessity: financial issues have forced her to retreat back to the life she outgrew years prior, back to the suffocating walls of her parents’ home in the woods. Things have changed though, as she finds the rear of the house damaged due to a fire. She shows concern for her mother and father, if only out of habit, but is mostly worried for her twin brother, Lemule, as it appears the fire originated from his bedroom. Unfortunately, it appears Lemule has gone missing. What follows is a tense journey through memory and revelation, and for being a story just over 10 pages there is a quite a bit of depth to the narrative.

I will admit I was hesitant about this story at the outset; after all, the return to a childhood home after a prolonged absence is a common set-up for a story. Yet that hesitation was wasted, as Strantzas’ tale is anything but common. He may use a familiar device to lead you into the woods, but what he shows you upon arriving there is drastically different from what you’d expect.

The restrictive quality of Samantha’s situation is in perfect opposition to the openness of the forest behind her home, and as a growing sense of suffocation builds throughout the story, we come to identify with Samantha, feeling her terror as if it were our own. We feel for her as she searches for her brother, digging through the remnants of a life gone up in flames.

On this note, something I've always appreciated about Strantzas’ work is how he skillfully embeds layers of tension into the story. As you read, you can feel the piece building upon itself, growing outward and moving toward something. This is where the “horror” of his fiction really lies. Like Robert Aickman before him, Strantzas is not trying to shock you; instead, he is trying to unsettle you, to lead you into the dark and leave you there, too frightened to scream for fear of what might be listening.

“Samantha gazed deep into the woods, unable to tell if it were day or night.”

It is impossible to talk about this chapbook without mention of Drazen Kozjan’s beautiful wrap-around cover illustration. The image wonderfully complements the story, and without it the piece would feel different somehow. Not that the story relies on the cover to work, but rather it feels like part of the story itself; a visual accompaniment to the narrative. It does a very nice job of enticing you to read and, upon finishing the story, provides a knowing representation of the entirety of the piece.

These Last Embers is a tale about returning home and finding it was never quite what you thought it was. Strantzas has turned the “spooky forest” tale on its head, showing us that there are times the darkness of the woods isn’t necessarily dark at all, and that it is sometimes preferable to the harshness of the world beyond it.

Michael Kelly has succeeded in offering fans of weird fiction the perfect story to spearhead his series of chapbooks. He knows quality when he sees it, and he knows what unsettles readers. As of this writing there are only 5 copies of These Last Embers left, so I highly recommend ordering yours while you can.

Also of note is Michael Kelly’s own book of short fiction, Scratching the Surface, which is definitely worth your attention.
Posted by Clint at 12:16 PM