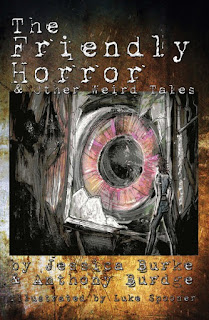 I do not often think of horror as being friendly. And while I've never disputed the fact that horror and comedy are often found on the same spectrum together, I've never seen them appear in equal measure: I am always either laughing hysterically or cringing in terror, never both, bringing me to the conclusion that, at least for me, the two cannot coexist and must always remain mutually exclusive. Jessica Burke and Anthony Burdge have shown me the error of my ways with The Friendly Horror & Other Weird Tales. They have taught me that it is possible to feel the creeping dread of cosmic horror with a smile on my face, and that laughter is often the best response when faced with the unknown.

This is the second edition of Burdge and Burke’s debut collection of weird fiction, complete with new cover and interior illustrations by Luke Spooner. The duo runs the fantastic independent publishing company Myth Ink Books and continues to impress with their high quality releases.

The collection opens with two poems, one from each author. It’s not too often you find poetry within a collection of weird fiction, and I wouldn't mind other authors taking note and implementing this into their own work. The poems are well-written and show a definite focus on word choice, and you get a small sample of each writer’s style before digging into the more meaty prose.

The first story, A Guide to Acclimating New Felines to their New Home, is an interesting piece that reads like a pet owner’s manual, if that manual were written by someone obsessed with the occult and scientific theories relating to household animals. It is not a conventional story, but that is part of its charm.

Next up is A Daddy & Me Day, a comical little story that uses the “bring your child to work” idea to great effect. This is a nice example of how the authors use everyday experience as a starting point for what typically becomes a strange, otherworldly episode. The normal events their characters are confronted with often cascade seamlessly to a believable conclusion, and this story is no exception. 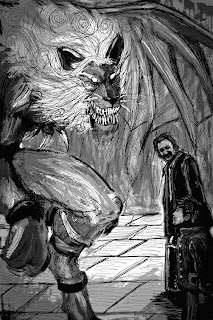 Hungry Snow just might be my favorite of the bunch, relying heavily on ambiguity rather than clear detail to instill dread in the reader. The story is an account of a strange childhood episode with an ending that reminded me of something Brian Evenson might write. Replete with a dead brother named Jimmy, a crazy mother who loves Begonias more than anything else in the world and a strange, many-toothed beast that may or may not be eating houses. This story is a bizarre and delightful trip into the weird.

If you’ve ever wanted to get inside the head of a serial killer too deranged for television, you will find Keepsakes to be just what you’re looking for. This is probably the darkest story of the collection and is quite different from the others, both in tone and style. Those who prefer their horror cosmic rather than visceral might find it shocking, yet there is a supernatural aspect to it that most will find enjoyable.

Concerning the Storm is similar to the aforementioned Hungry Snow in that it deals with aspects of nature, though the way it is presented is very different. A woman recently hospitalized during a natural disaster has a strange bedside visitor who asks her to recount the accident. She and her husband have been severely disfigured by something unexplainable, something too great for the human mind to comprehend, and as the story unfolds we realize the woman’s visitor is not at all what we expected. This story reminded me of Stephen King’s The Mist in how it presented an individual against the outré, culminating in an ending that is as bleak as it is devastating.

Lastly we come to the title piece The Friendly Horror, a story about Lovecraft, the Deep Ones and ice cream. By this point in the collection the reader is aware of how these two authors tell a story: the unique writing mannerisms they use; the way they build a genuinely funny and/or horrifying narrative; the way they keep surprising you with truly original concepts. What is perhaps most interesting about this story, however, is the setting. They've taken their home of Staten Island and merged it with the Cthulhu Mythos, even going so far as to make Lovecraft himself a character in the story. The Friendly Horror reads like a love-letter to Lovecraft without ever coming off as pastiche, and it was fun to see a new take on the expansive tradition of weird fiction. It was obvious at the onset of this collection that Burke and Burdge were fans of the Man from Providence, but this story showed me how well-versed they are concerning the historical aspect of his life. 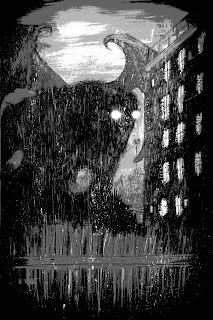 While The Friendly Horror & Other Weird Tales is considered a Lovecraftian collection, and proudly pays homage to that legacy, it also has a very modern sensibility. Doctor Who gets a mention, as does Jeff Lindsay's Dexter, Miami’s infamous serial killer. The fanboy in me geeked out over a brief reference to Gaiman’s Sandman series, and I could practically smell the coffee and cherry pie at the Double R Diner when a story talks about Agent Cooper of Twin Peaks. The frequently embedded cultural references add a welcome layer to the stories, allowing readers with similar interests to relate with the characters on a deeper level. That said, readers unfamiliar with the references may feel left out when they don’t “get” them. However, it is important to realize that these nods to popular culture are simply spice added on top of already enjoyable prose, and not knowing what color the stripes on Tom Baker’s scarf was during his stint as the fourth Doctor will not detract from the enjoyment of these well-written tales.

This is a collection that wears its influences overtly but comfortably, successfully blending the familiar with the uncanny in a refreshing way. Many of the stories begin with a foot cemented firmly in reality, only to withdraw said foot and show us a completely different reality, or perhaps the dark truth behind our reality. Yet, there are no mind games being played here; everything that happens in these stories feels genuine and believable.

This wide assortment of tales invites you in with a kind smile and a gentle nudge and, like with a friend or partner you trust implicitly, you invariably walk hand-in-hand through the darkness. However, you soon realize that the person holding your hand isn't who you thought they were; you wonder how you ever managed to get them mixed-up with someone else in the first place, but by then it’s far too late, and far too dark, to turn back.

Support a great small press and order The Friendly Horror and Other Weird Tales directly from Myth Ink Books.
Posted by Clint at 12:03 AM